Here’s the stuff I worked on last week:

I dedicated the week to creating a small diorama to serve as a goal for the project’s visuals. Having gone back and forth between mock-ups in Unity and paintovers in Photoshop, it’s great to have something that’s fully real-time and that feels like a good representation of the look and feel for the project as a whole. Obviously, everything is still early WIP, but even with the flaws and limitations, it’s starting to look like what I have been imagining in my head. 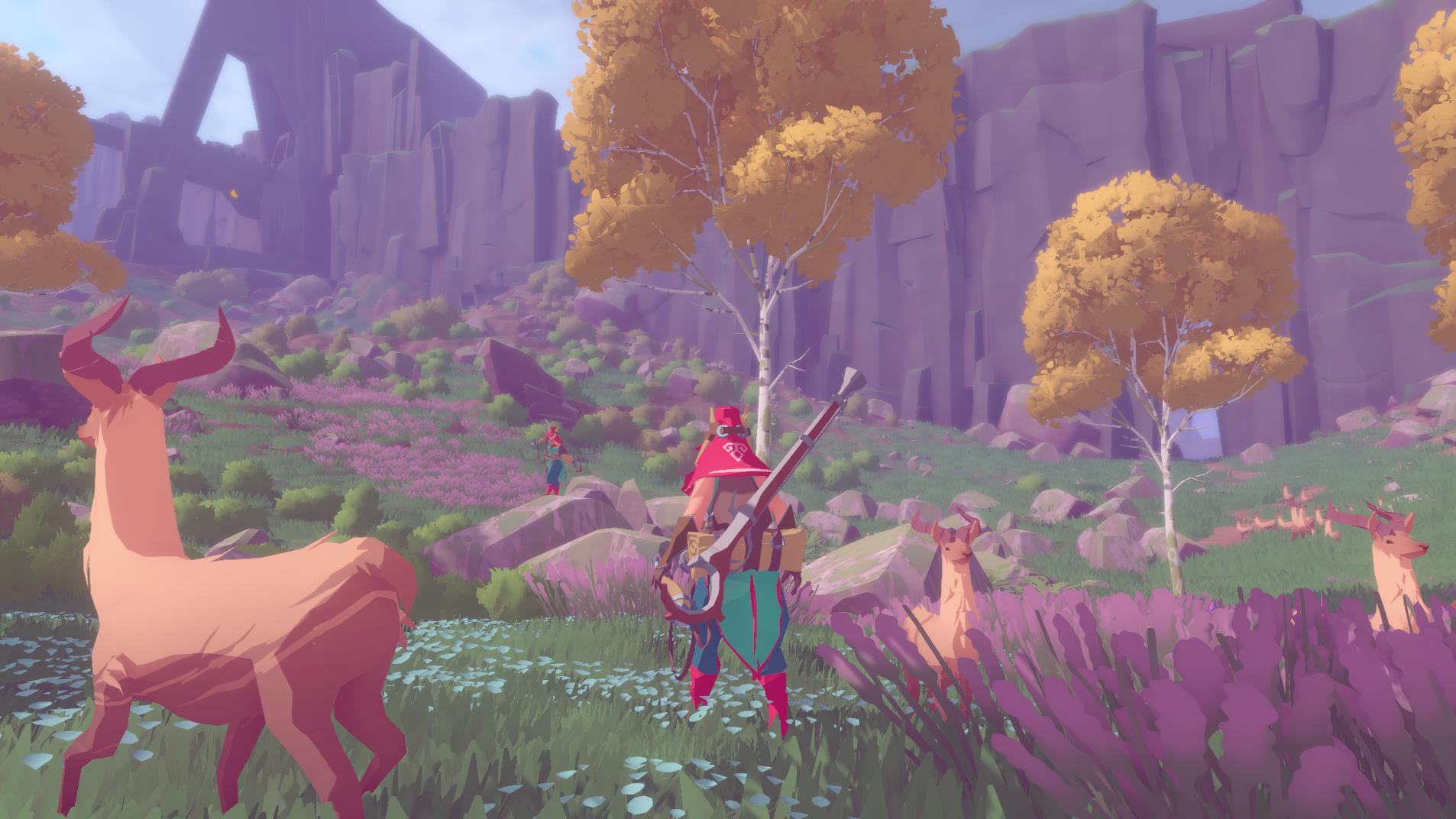 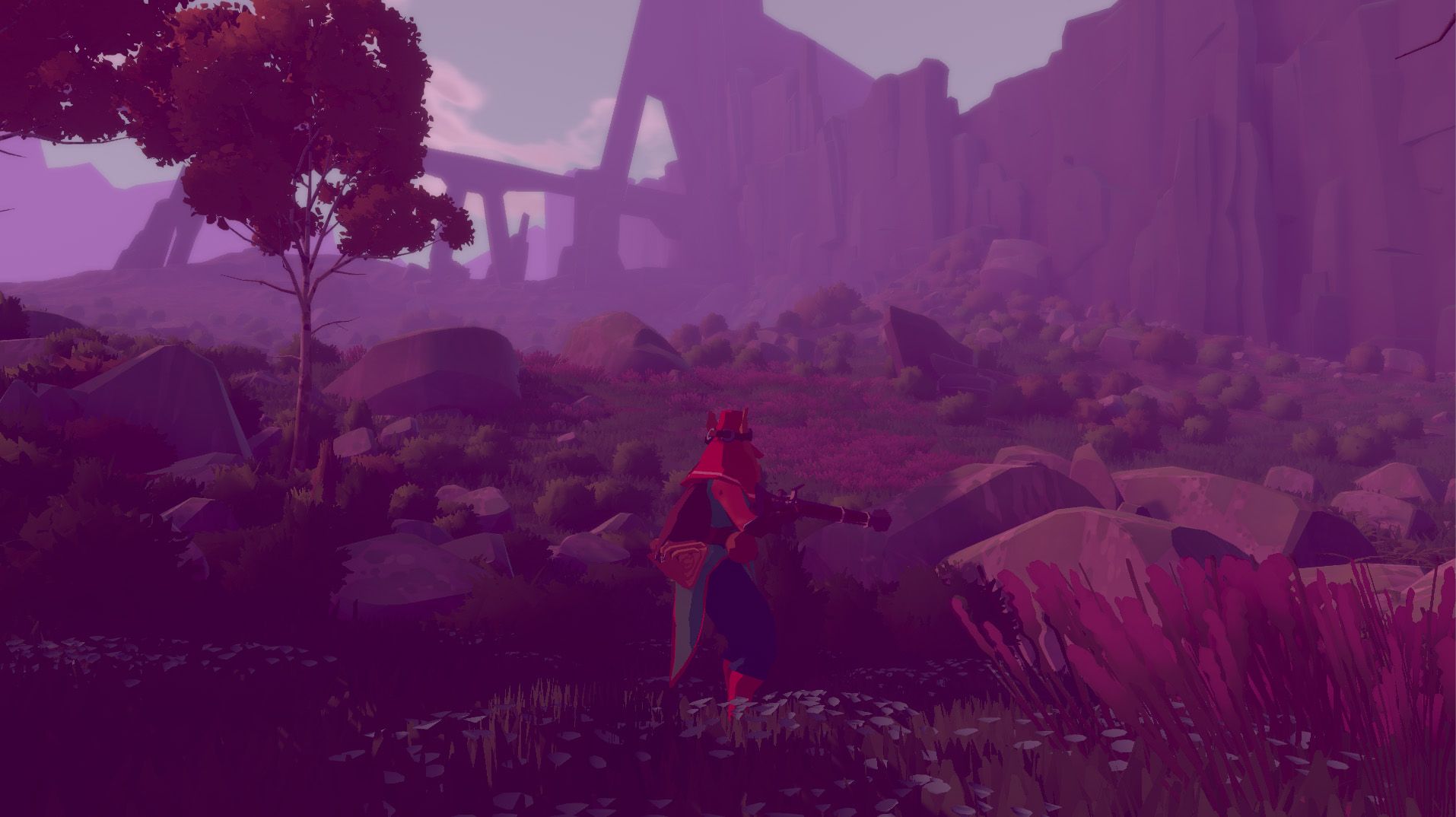 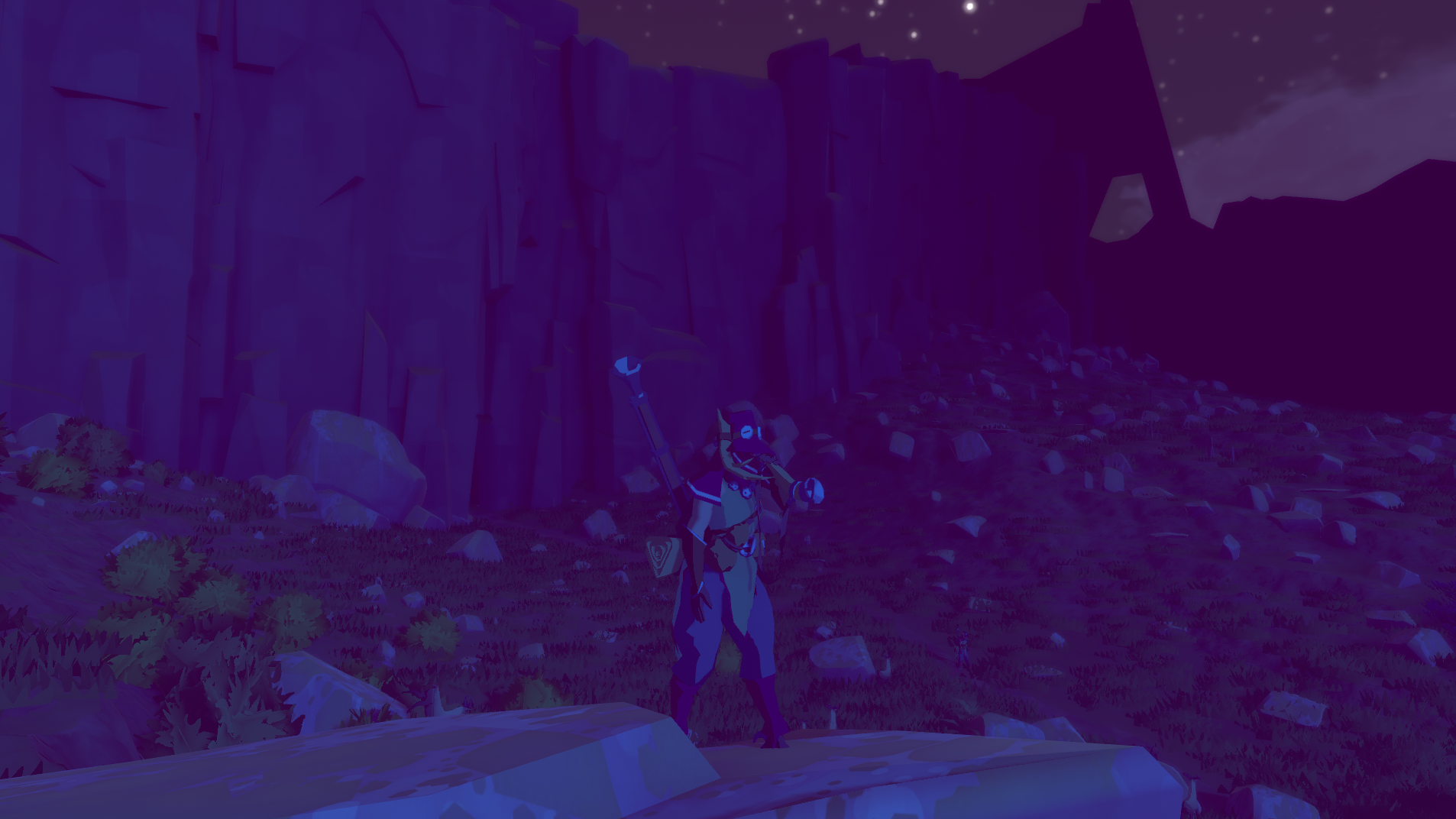 Here’s a quick turnaround video to see things in motion.

Note, as the other visual elements get leveled-up, the creature animations and pathfinding look increasingly crude. I definitely would like to finesse those aspects at some point.

I implemented a time of day system using a customized version of an asset from the Unity Store. It’s a pretty neat package that gives you simple, flexible controls over all aspects of lighting, weather, fog conditions etc. I could play around with this stuff endlessly (colour scripting is my happy place!) and it’s interesting how different lighting setups can have a significant impact on the mood of the same environment.

I’m interested in exploring other elements that would have an impact on co-operative gameplay. One area that I think could be interesting is having mounts that can be ridden by multiple players simultaneously (one controls the animal, one can use instrument/weapon etc.). There are a number of ways to go with mounts, visually, but I really like the idea of some kind of (extra!) big cat. So I did a quick concept for how something like that might look. Note the dual saddle!

I think it would be interesting for the players' animals to be affected by different environmental/weather conditions (walking through mud slows them down; prolonged exposure to snow affects their stamina etc.) and I wanted to play around with how I could represent those conditions visually on the characters. I put together a shader that uses texture blending in conjunction with vertex colours so that when exposed to a particular effect, a tiling texture gets blended on top of the base diffuse map according to the strength of the vertex colour values.

A quick sketch for a predator enemy idea. This thing would not only attack the players' animals, but also potentially spread plague amongst them, too. 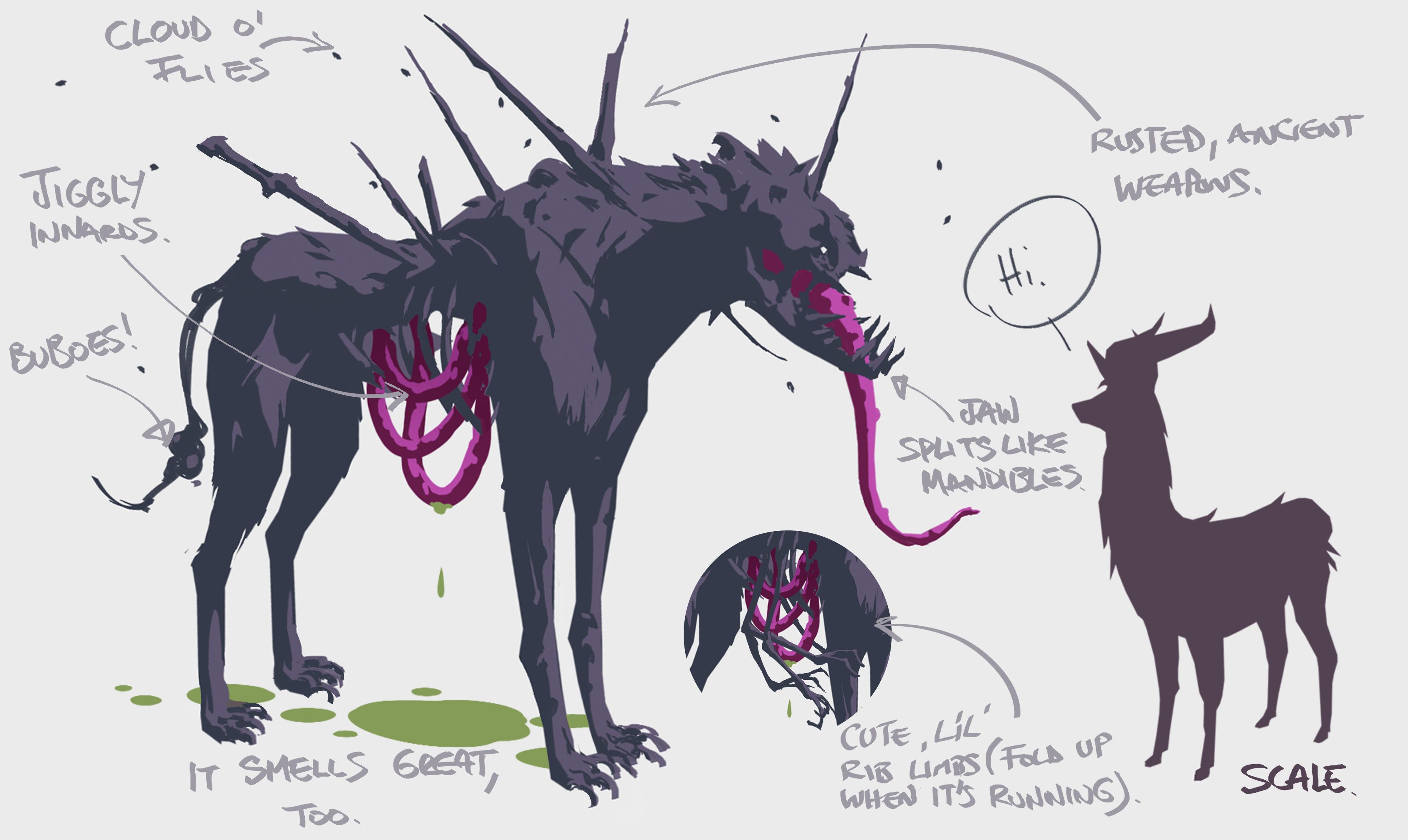 It’s possibly way too creepy - I’ve been watching/playing a lot of Resident Evil 2 & 7 lately - but I think there might be something interesting in this space!

A couple more shots from the diorama scene. I added more colourways for players and also put fireflies in too (currently just a model swap with the butterfly prefab when it turns to night-time!). 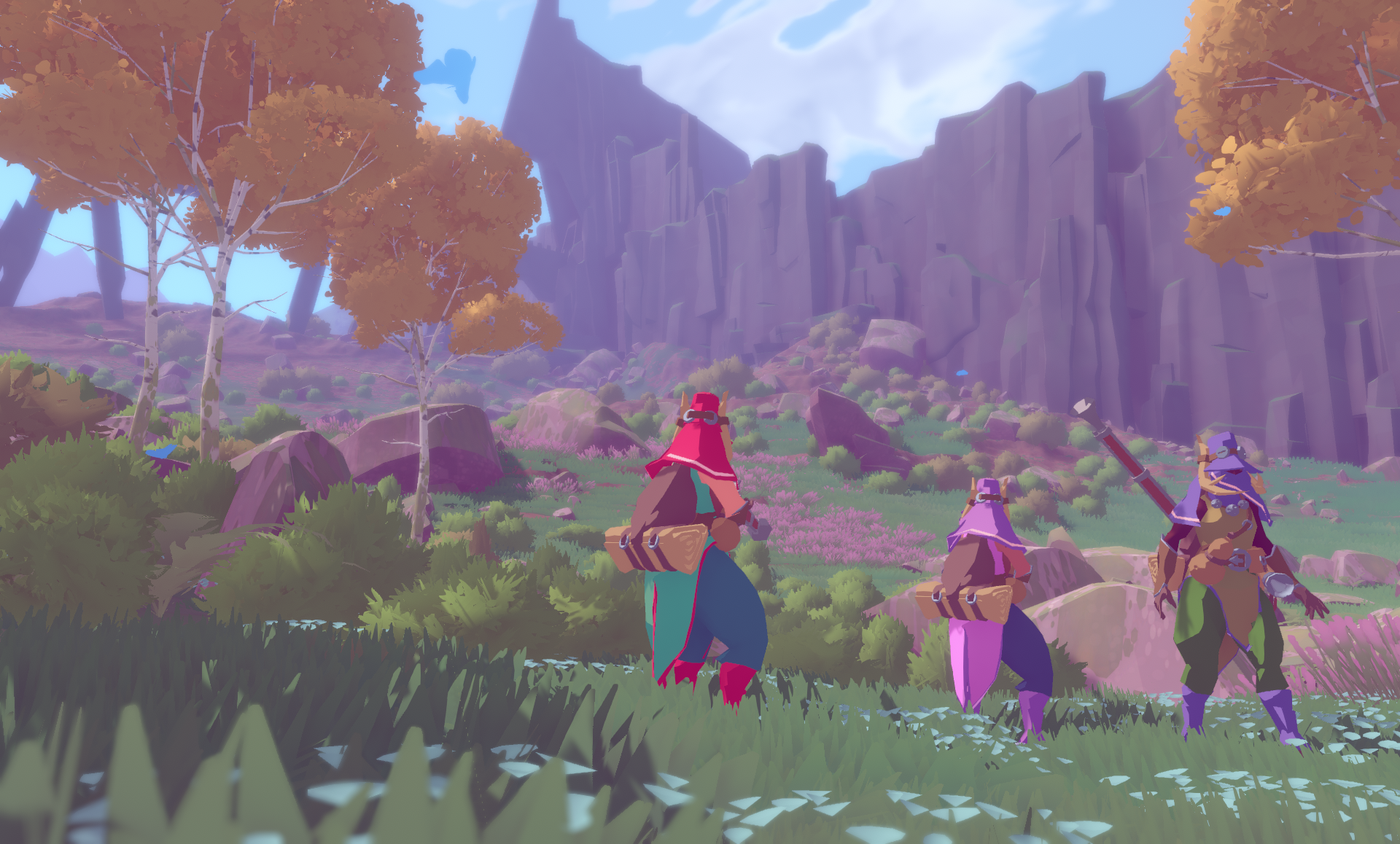 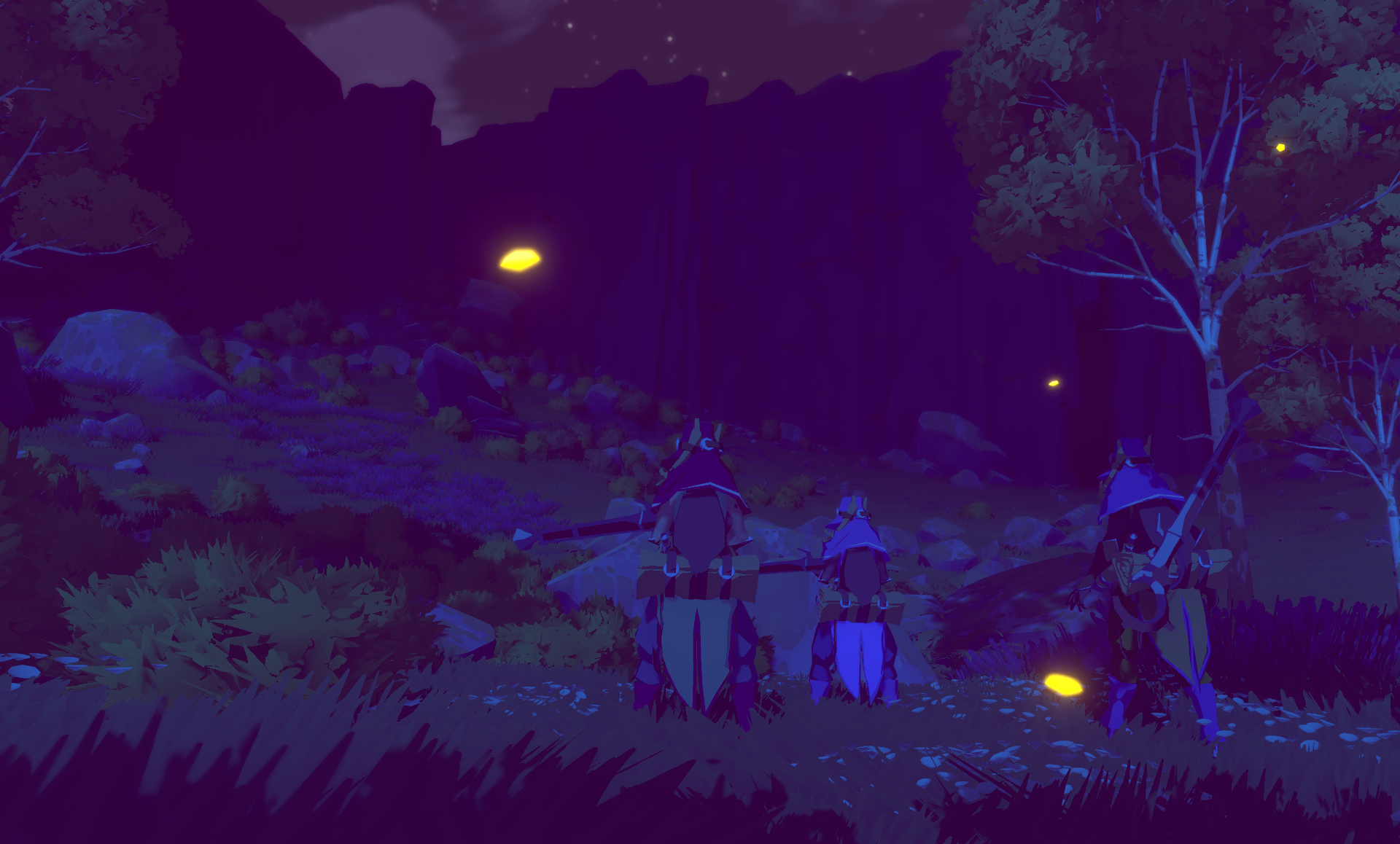 I’ve been creating the diorama scene using Unity’s terrain tools so far, but in order to populate things more densely and over a larger area I need to convert my terrain to use Vegetation Studio Pro and recreate things as closely as possible. I also want to prototype some mount gameplay ideas in terms of direct control when riding, and also using the player’s horn instrument to command the mount from afar.