Here’s what I’ve been working on the past week.

Previously, the herd animals were just randomly wandering, but I wanted to add an actual path that they would default to following (unless the player commanded them to do otherwise, or they were running from danger etc.). I used a Bezier Path Creator from the asset store to create the route for the animals to follow and then plotted waypoints along it at regular intervals. Now, the animals will - if they have nothing else to do - look for the nearest waypoint and follow the path from there. The final waypoint also spawns a checkpoint and each animal that reaches it is counted as ‘safe’.

Once I’d plotted a path through the terrain, I wanted to add some kind of obstacle for the player and his flock, so I made a big wall with a gate that the player can only open by scaling a ladder and pressing a switch (a Zelda-type one where it closes again if you step off, of course!). Super simple, but a starting point for sections where the player gets separated from the flock temporarily. 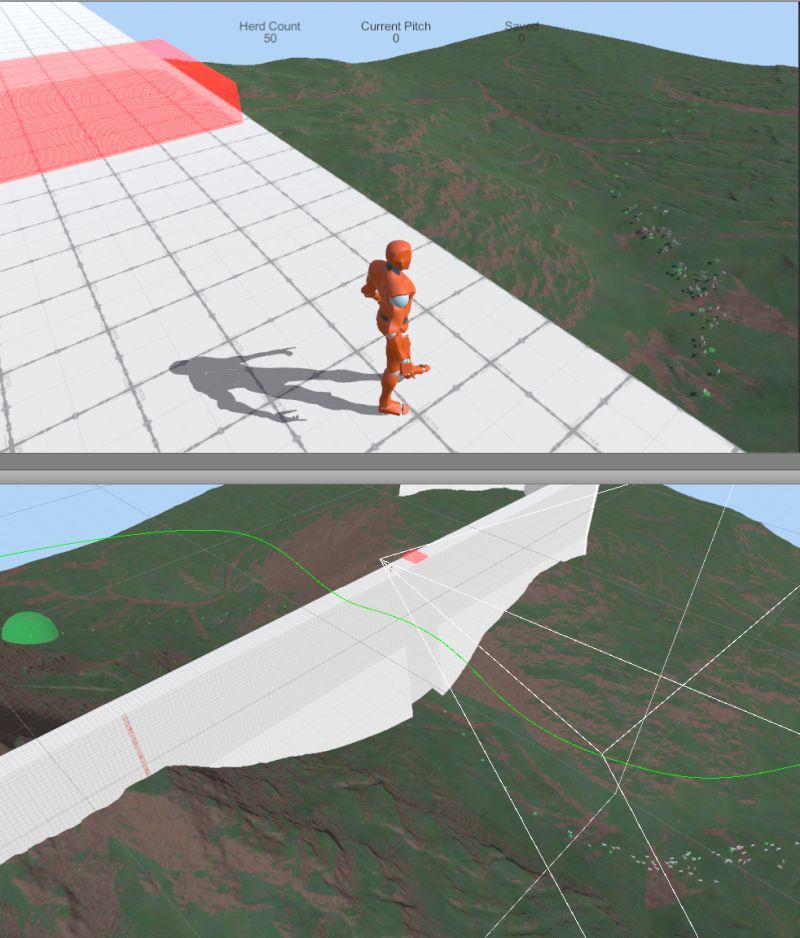 Related to that, I made it so that the gate would kill animals if it fell on them (sorry…) and also that nearby animals would be briefly scared when the gate fell. I added to the ‘Scared’ behaviour that I made last week with low/medium/high levels of fear. So, threats will have different ranges and last different lengths of time depending on their danger level.

I expanded the command vocabulary for the player’s horn by adding calls that speed up or slow down the herd’s movement. The animals have four movement speeds (stopped, slow, fast, max) and the player raises or lowers their speed by playing the speed up/slow down command. I added the notion of tiredness and hunger, so now the animals will use up stamina as they move (it depletes more quickly at faster movements speeds).

I want to encourage players to co-operate as much as possible, and one way I thought to do this is to give a ‘buff’ to commands that are performed by players simultaneously. I tested this idea by creating a second player and controlling both at the same time. When the two players play the same command and their call spheres overlap, a new sphere is created at the midpoint between the two players which expands out, carrying the command over a much larger range.

I focused mainly on design and prototyping rather than art tasks this week. I did however do a little more research into terrain workflows and then spent some time on a character model for the flock animals. I figure there would probably be different species within the game, but I wanted to get at least one asset that matches the look of things in there so I could replace the temp model I’ve been using so far. I’ve not gotten into rigging or animating this model yet, but I’m pretty happy with the general style and proportions of this deer/alpaca hybrid thing! Next step is to explore variants (male/female/young and special one-offs) on the base model. 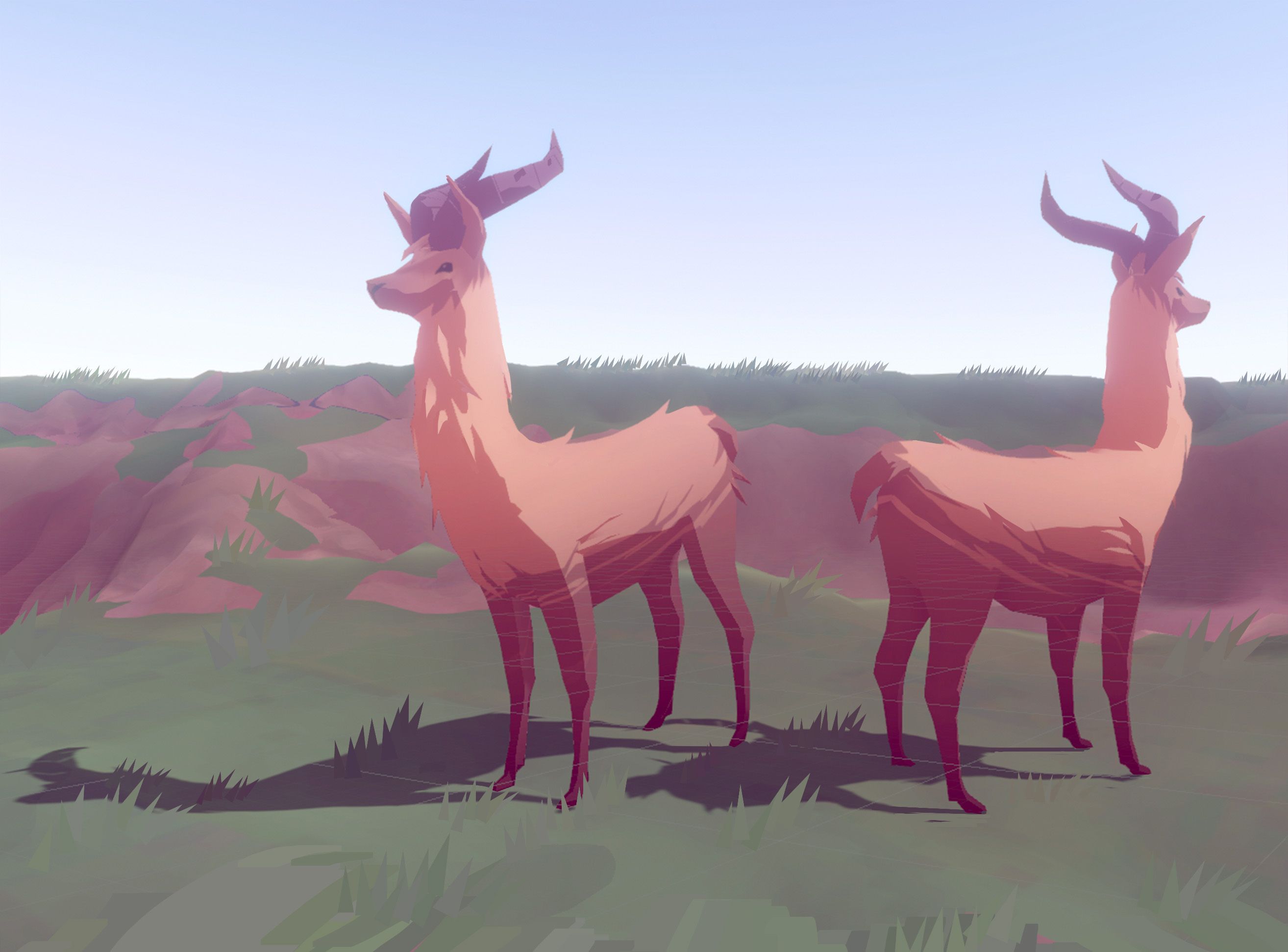 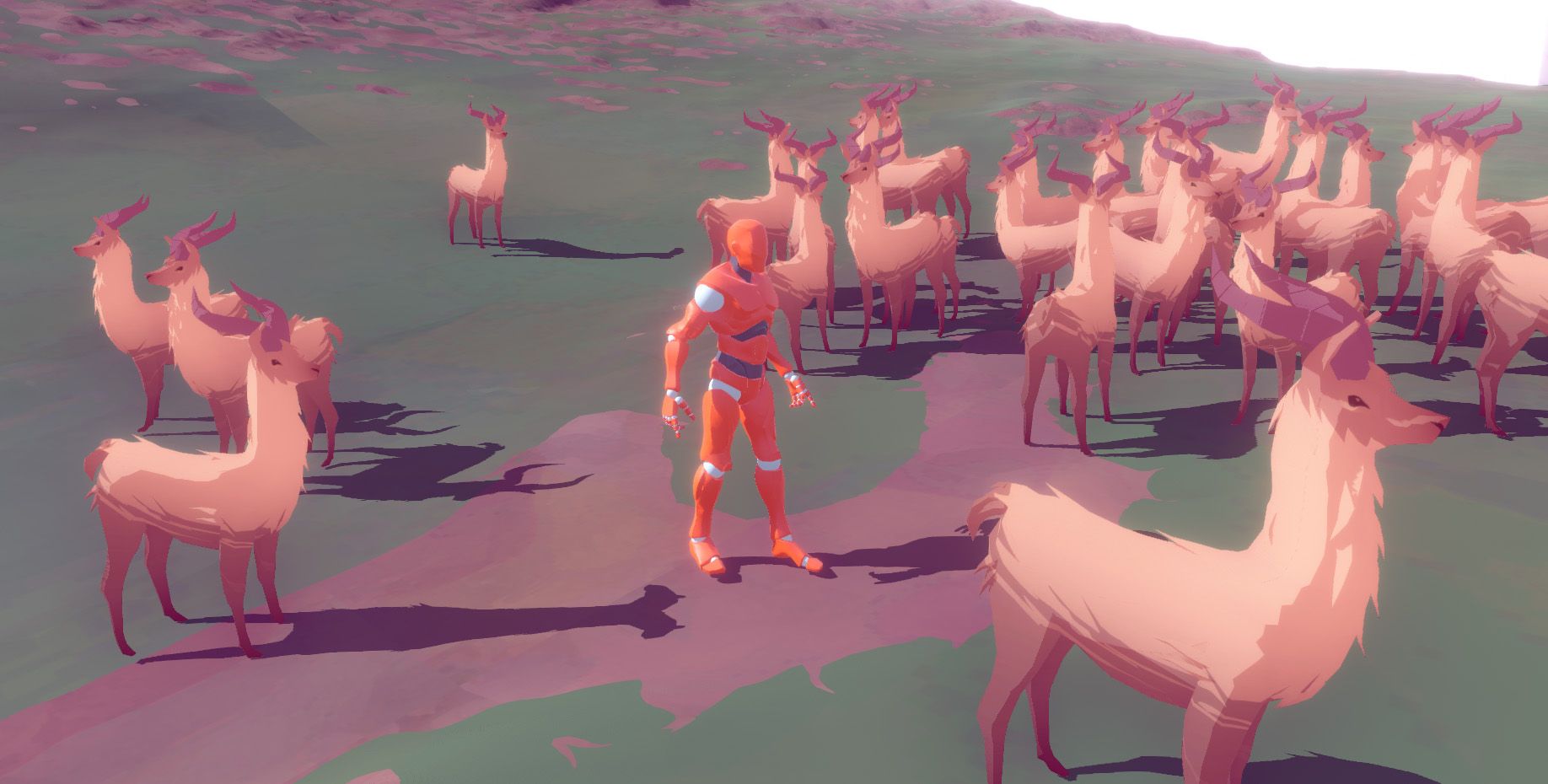