So this past week I’ve been working on defining a style and setting for this current prototype. It’s still early days, but I’m pretty happy with the direction it’s going in so far.

Obviously, it’s important that the visual style of a game supports and ideally elevates the design and doesn’t fight against it. For a project like Matterformer, where there is a degree of randomness to how things will populate, it makes sense to keep the number and complexity of onscreen elements to a minimum, since it’s not possible to curate the compositions as you would with a game that’s not procedurally generated. So the challenge is to find an aesthetic that is simple but still has personality and mood to it. To refer back to the moodboard I included in the previous post, I chose a number of these images as they fulfill both those criteria, I think: 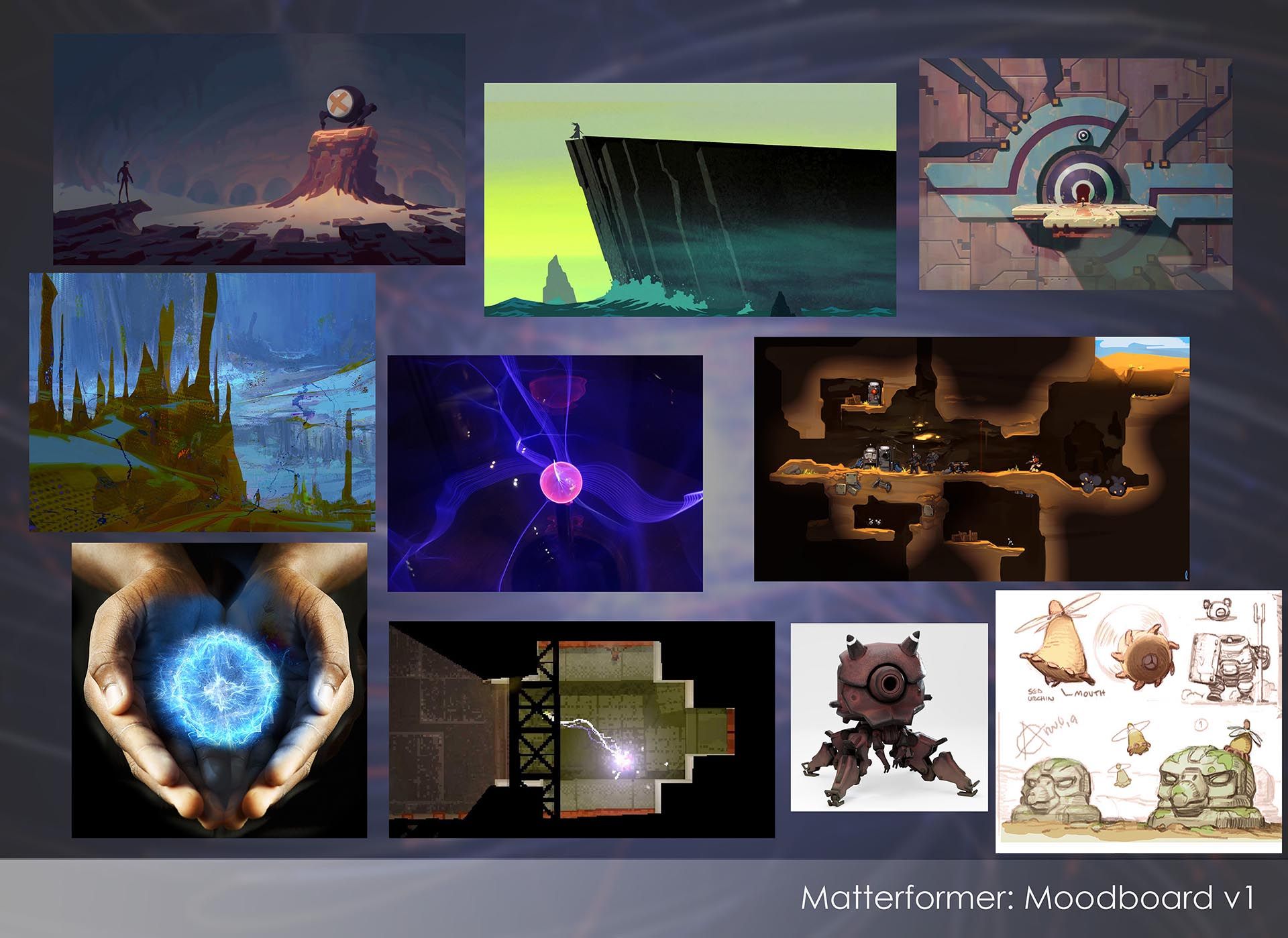 So, with the creative constraints I mentioned above in mind, I made the following visual target for the project. In creating these early look-and-feel type images, I’m intending not only to communicate the potential style of a project and how it could be constructed with real-time assets, but also hopefully to give a bit of a mood of the game as a whole and ideally provide hints to kinds of experiences that players will be having in the game, too. This image shows (amongst other things hopefully!) the precarious nature of the environment, the use of the players' dynamic platforms, a waypoint node etc. 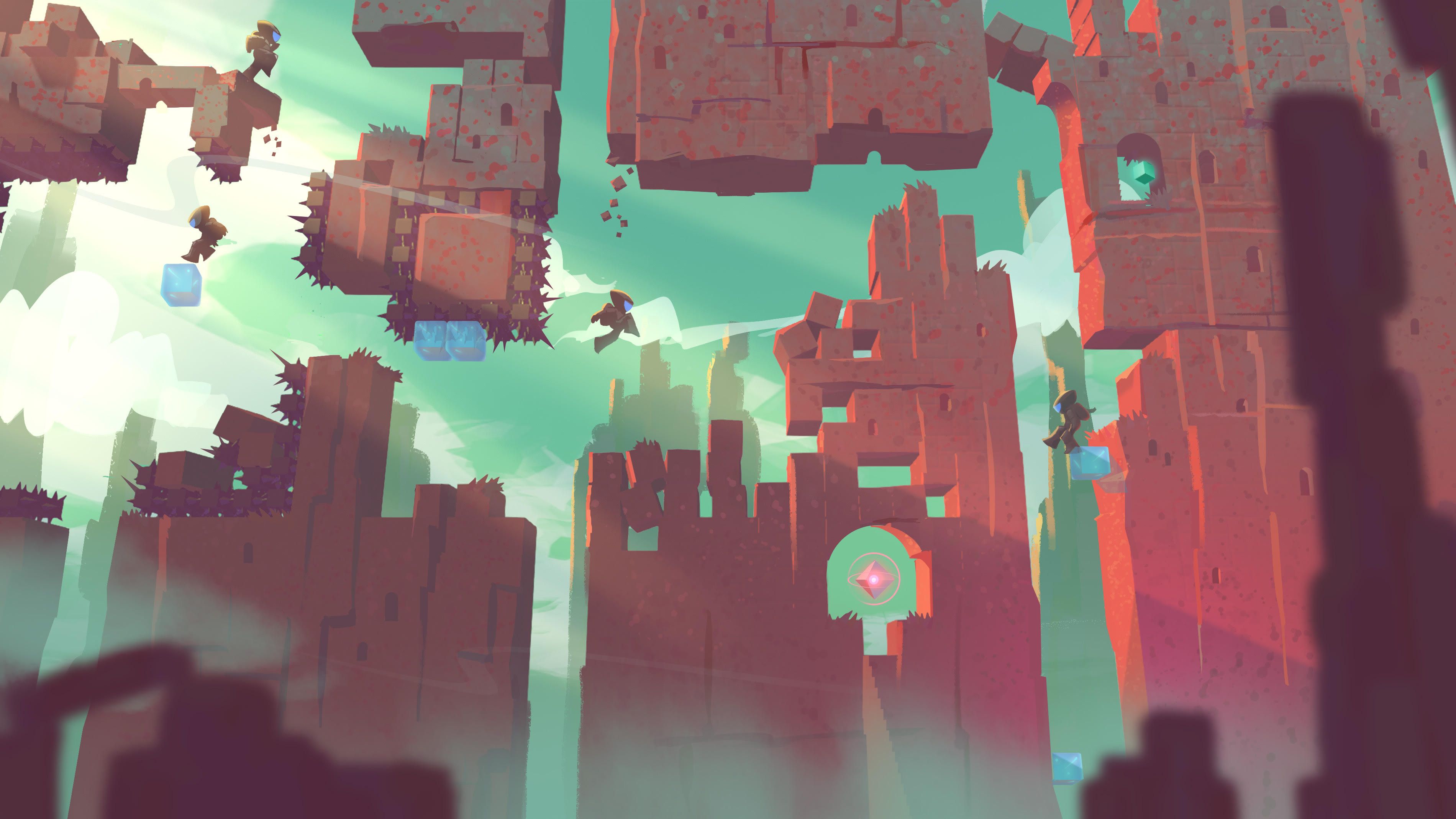 The player character also needs to be super simple, I think as this is a multiplayer game and there could be potentially many of them on-screen. So, I want the player character’s design have an easily readable silhouette and no unnecessary internal details: 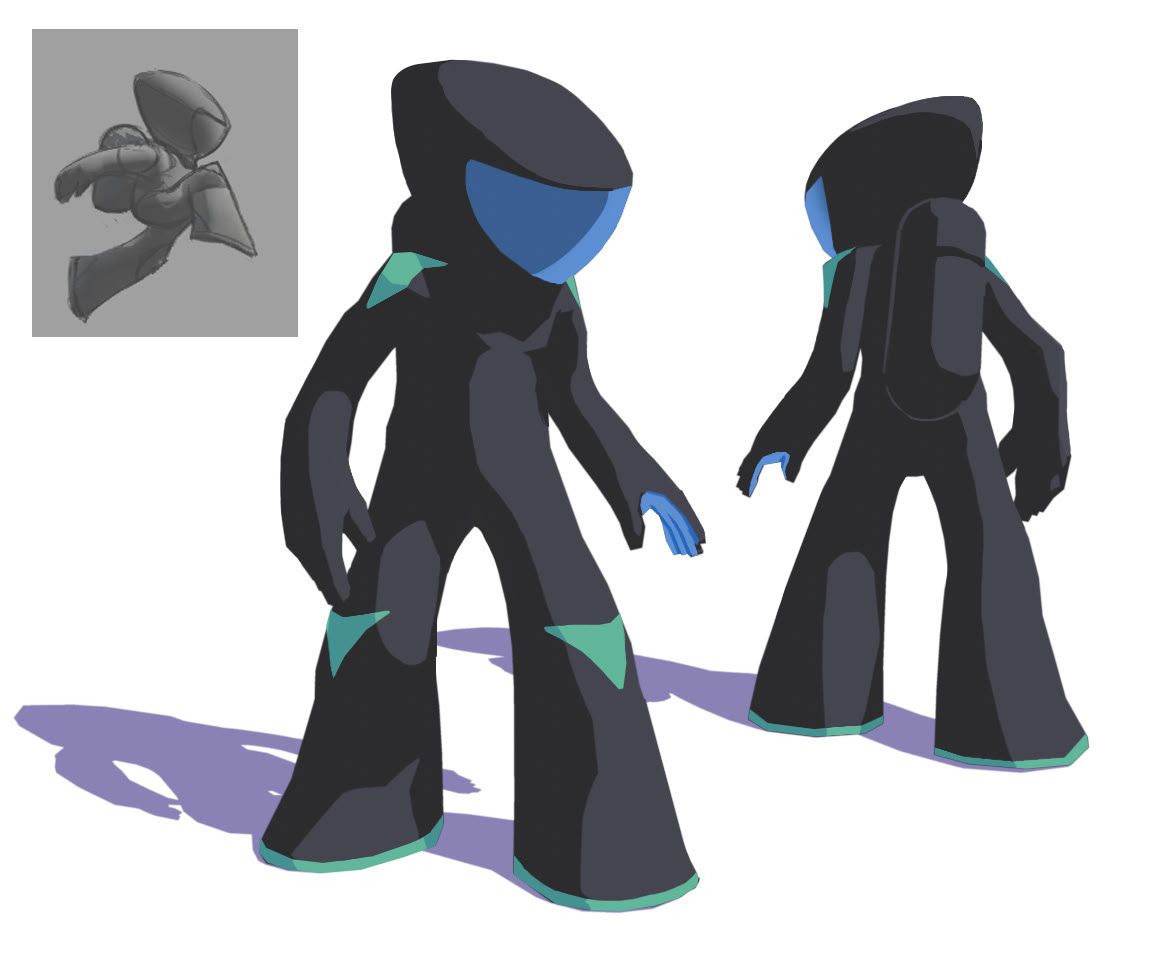 As further means of discerning between players on screen, I imagine that player characters other than the one that you are controlling would be coloured differently, or be greyed out (or differentiated in some other way).

My usual workflow is to create and animate 3d characters, but I thought for this project that it might be interesting to use more 2d elements. Since I’m not a 2d animator, I decided to author sprite animations by creating a 3d character model and then rendering out animation frames as sequences of 2d images. Of course, you can achieve a similar result using toon-shaded 3d model, but I think that sprites have a ‘snappiness’ - for want of a better term - that’s hard to replicate in 3d.

Iterating on the Core Loop

Outside of working on the visual aspects of the game, I’ve also been iterating on the basic elements of the game. Players must now locate 3 waypoint nodes, which appear one at a time, before they can reach the level’s exit. A player’s ‘compass’ will point in the direction of the current objective, whether it’s a waypoint or the exit.

I also added a second player to see how it affects gameplay . Things quickly get more difficult as the potential for collapses and other hazards multiply with multiple players involved. I decided to limit the number of platforms that a player can create to 2 initially, but have added additional, collectible platforms within the game’s levels. They tend to populate near to hazards though, so there is always an element of risk-reward to obtaining them!

Here’s a quick video of some co-op footage:

My plan is to continue to develop the visuals for the game, beginning with translating the key image above into real-time and then expanding the visual vocabulary of the game in tandem with growing the number of gameplay elements.