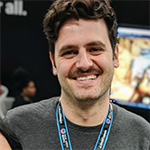 Last weekend we hosted our first external game jam. It was an exciting moment, since it was the first time that people outside the development team have had access to the coherence SDK.

Being the first of its kind we kept it a bit under wraps, and made it an invite-only event. But the turnout was great, and the jammers made a bunch of fun games despite the tight schedule! 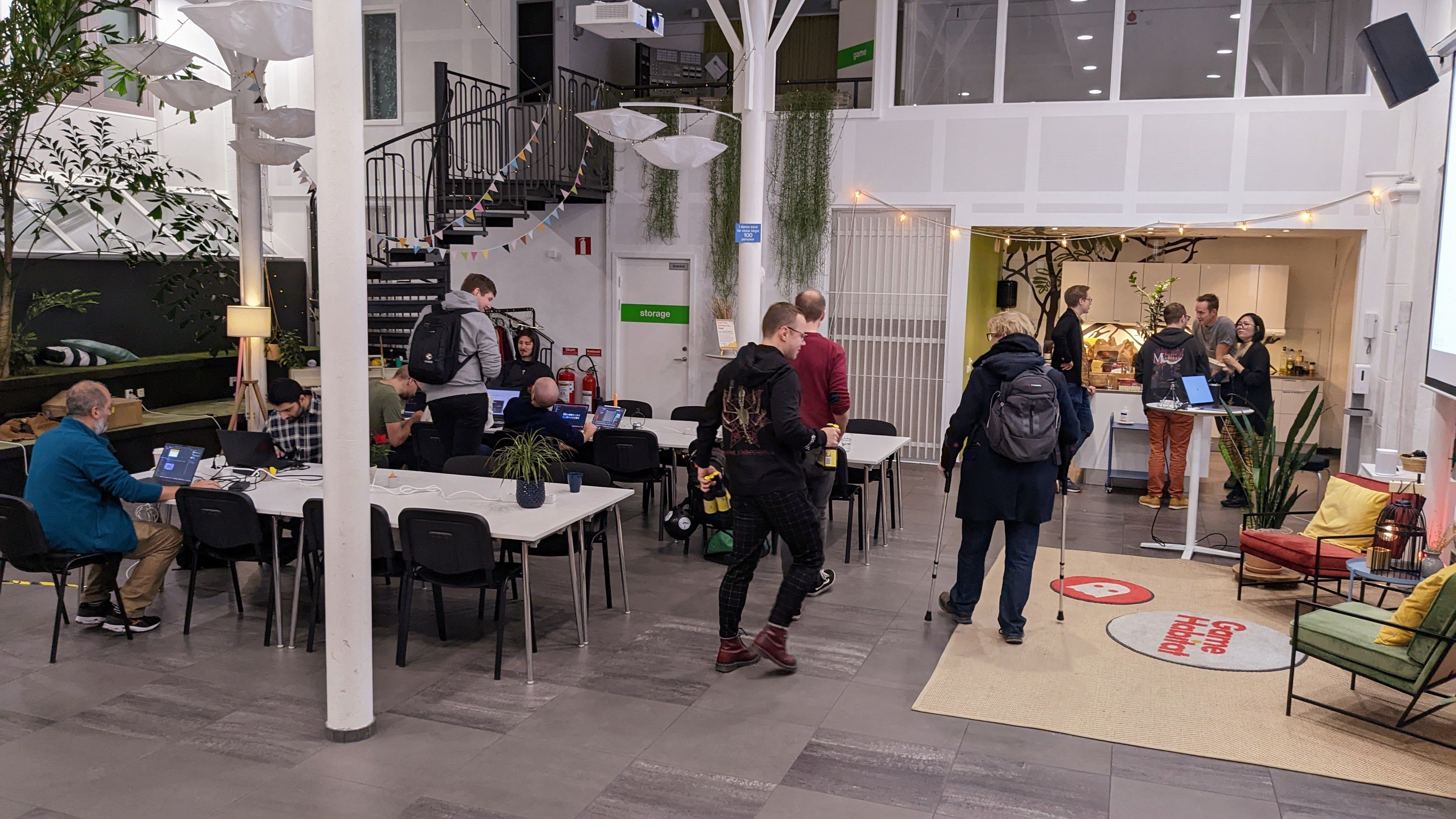 The atrium of Game Habitat DevHub, the space that hosts the coherence office.

We had a mix of people joining us onsite in Malmö, where our office is located, and remotely. Because of this hybrid setup, we coordinated the jam on our Discord server, and organised a small streaming station to broadcast the opening and closing of the event on our YouTube channel.

It was a classic 48-hour game jam. We opened on Friday night with an introduction talk, where our CTO Tadej Gregorčič demonstrated how to get started with the coherence SDK in Unity. It’s always a bit scary to give live demos that rely on a connection as, even if the tech itself holds together, network conditions might make it fail spectacularly. But it all went quite well! 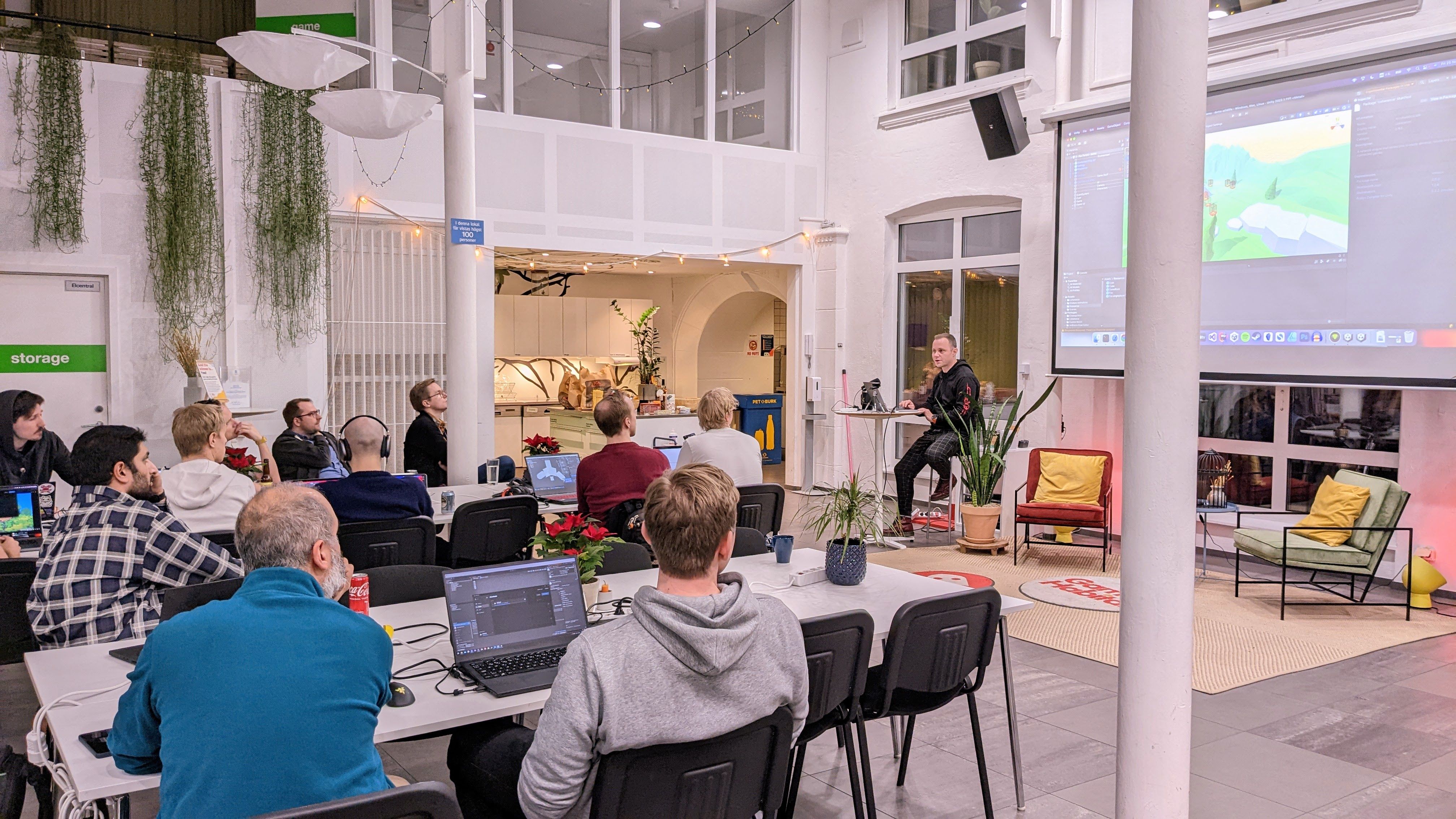 You can judge yourself by watching the recording of the intro on Youtube.

In the end, seven games were made during the jam, and almost all of them made it to the itch.io event page where you can try them. We were honestly surprised at how far the jammers got with the online interactions!

For instance, in Duck Planet players compete against each other to catch a coveted crown and become the King of Ducks, by running around a planet bombarded with comets and using a spin attack to send other ducks flying into orbit. 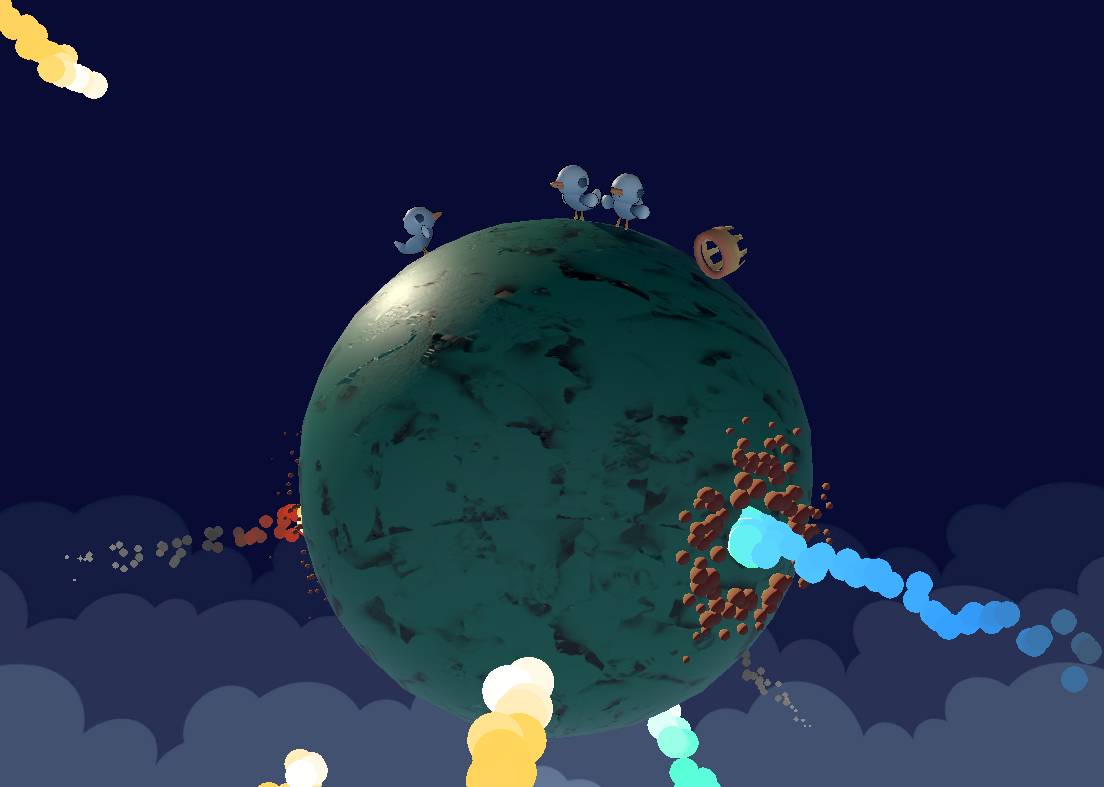 Ducks running around in Duck Planet.

Duck Planet features a typical case of authority switching, where the crown is passed from client to client so that the one that currently holds it is simulating it. Smart!

(What is “authority”? We have some documentation on it!)

Grave Mistake, probably the game with the highest production value, does one thing that is always fun: asymmetrical multiplayer. In the game, the first player to join becomes the Ghost, and has to chase down and touch the other Human players before they manage to collect all the golden skulls spread around the haunted mansion and win.

Grave Mistake features a cool custom-made X-ray shader, and the weirdest of walk animation loops. Check it out to see what we mean! 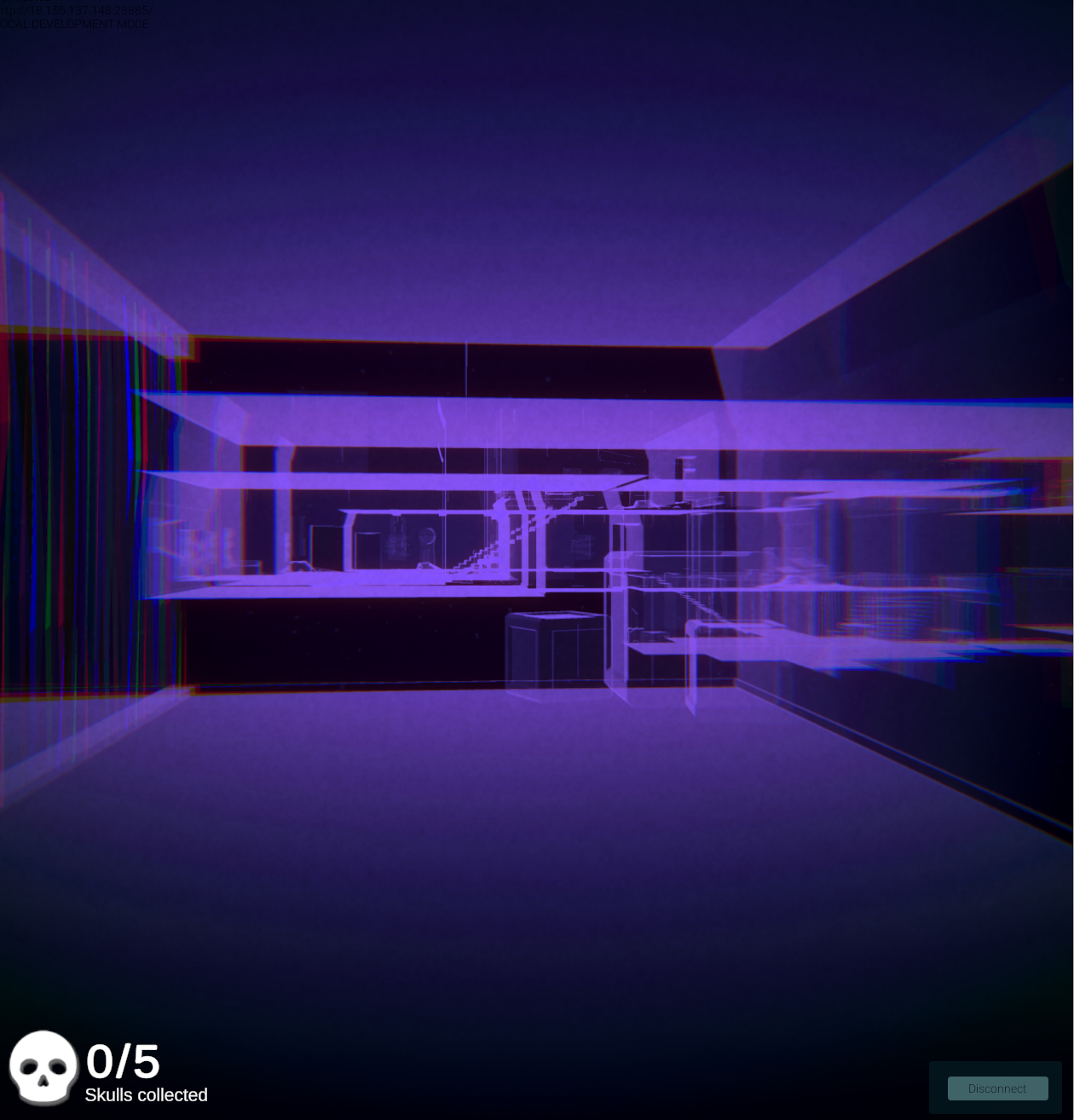 The X-ray shader in Grave Mistake.

Each and every game displayed something unique!

Like the game Mine Drifters (not uploaded to itch.io), which revolved around multiple players riding the same vehicle and taking control of different parts of it. Really ambitious for a game jam! You can catch some of its gameplay in the end presentations.

Dunken was a recreation of a game of tag, in You Are a Ball! we saw a clever solution to do networked physics with no server, DiffLite is a small and cute “find the differences” game, and finally DrawTogether is less of a game and more of a collaborative drawing tool.

Old-school graphics but totally modern fun, in You Are a Ball!

You can rewatch all the game’s presentations in our closing livestream!

The jam was certainly a reassurance to us that we are on the right path. But we also got a ton of feedback on usability, and a few bug reports. We quickly transformed the feedback into actionable items, and the team is already at work on the 0.11 version of the Unity SDK to implement these suggestions and make the experience even better.

And of course we’re preparing a few juicy samples, which should help in taking your first steps with coherence. More on that soon! 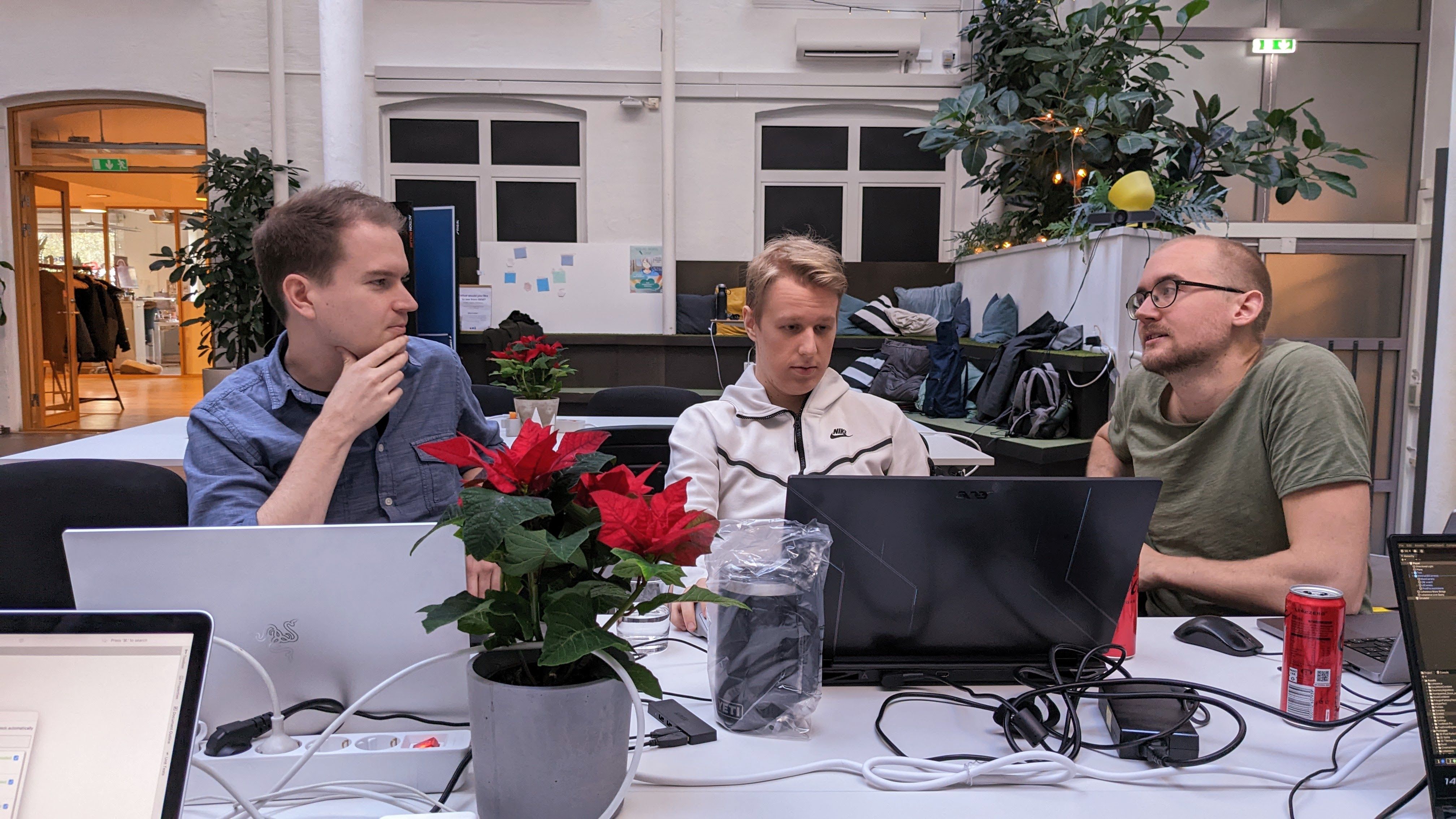 A bit of chit-chat on the morning of the final day.

The game jam also showed us that - Yes! - one can make multiplayer games during a game jam. Sounds crazy, but it’s true. As such, we plan to host more events of this kind, and this time you are all invited. Besides, we will be ready for Global Game Jam early next year, so look out for coherence at the end of January...

If you are interested in checking out our technology, you can do so by getting the Unity SDK from our documentation; and if you have questions hop on our Community or Discord server, and fire away!

PS - if you want to check out some fun game jam sound effects, there's also a post on those in our Community forum!