This week I’ve been focusing on developing an IP for this game concept which hopefully would help it to stand out from Minecraft and other such games. This is all still rough, of course, but here’s what I have so far:

While reimagining the setting for this game, I wanted to make sure that the potential for creating many varied play spaces would not be lost. Biome variety is one of the key strengths of procedural, sandbox games so the IP needs to be flexible enough to allow for all kinds of worlds.

I started thinking about ‘Sword & Planet’, which is a pulpy sub-genre of science fiction that mixes fantasy, soft sci-fi and human technologies. It basically allows for human protagonists to have all manner of adventures on alien planets without having to explain any of the science questions (‘how can people breathe on Mars?’ etc).

With that in mind, I began imagining a game concept where players take on the role of intergalactic pioneers - maybe traveling between planets through portals - who are creating outposts on the frontiers of these bizarre, dangerous and enchanting new worlds.

I’m envisaging that the human tech would be of an industrial revolution type era, rather than modern day or futuristic as I think that fits better with the ‘sword and planet’ vibe and also the chunky, voxel aesthetic. I created a revised moodboard to reflect this change of IP direction: 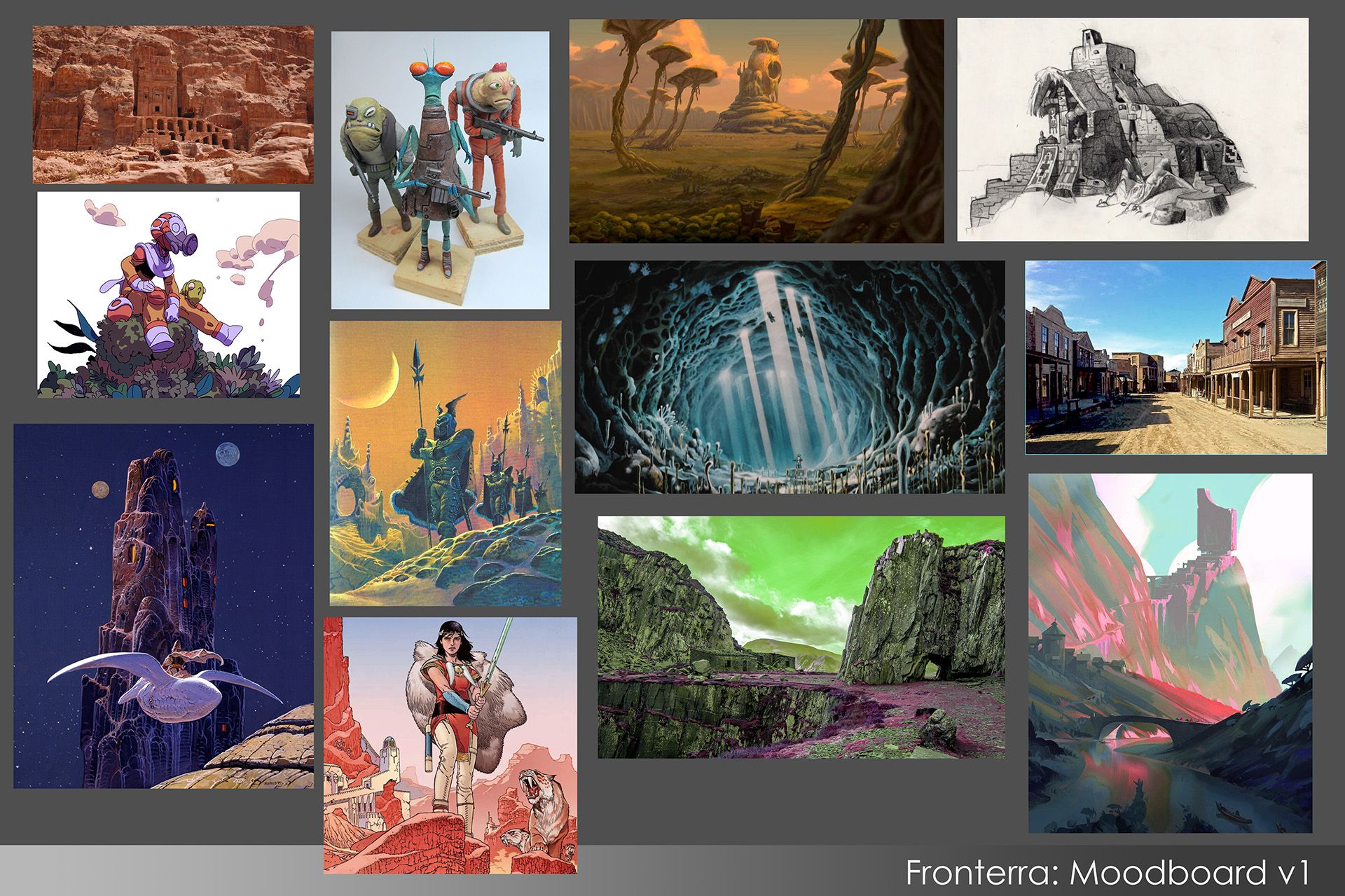 So the next step is to create some biomes that all offer not only visual variety, but also significantly different gameplay possibilities. Creating biomes that merely look unique from one another is relatively straightforward, but ideally each environment that players encounter should feature elements that force them to adjust their strategies and playstyles. It’s still early days in my development of new biomes, but here’s one I’ve been working on this week and examples to illustrate this gameplay-centric approach to visual development: 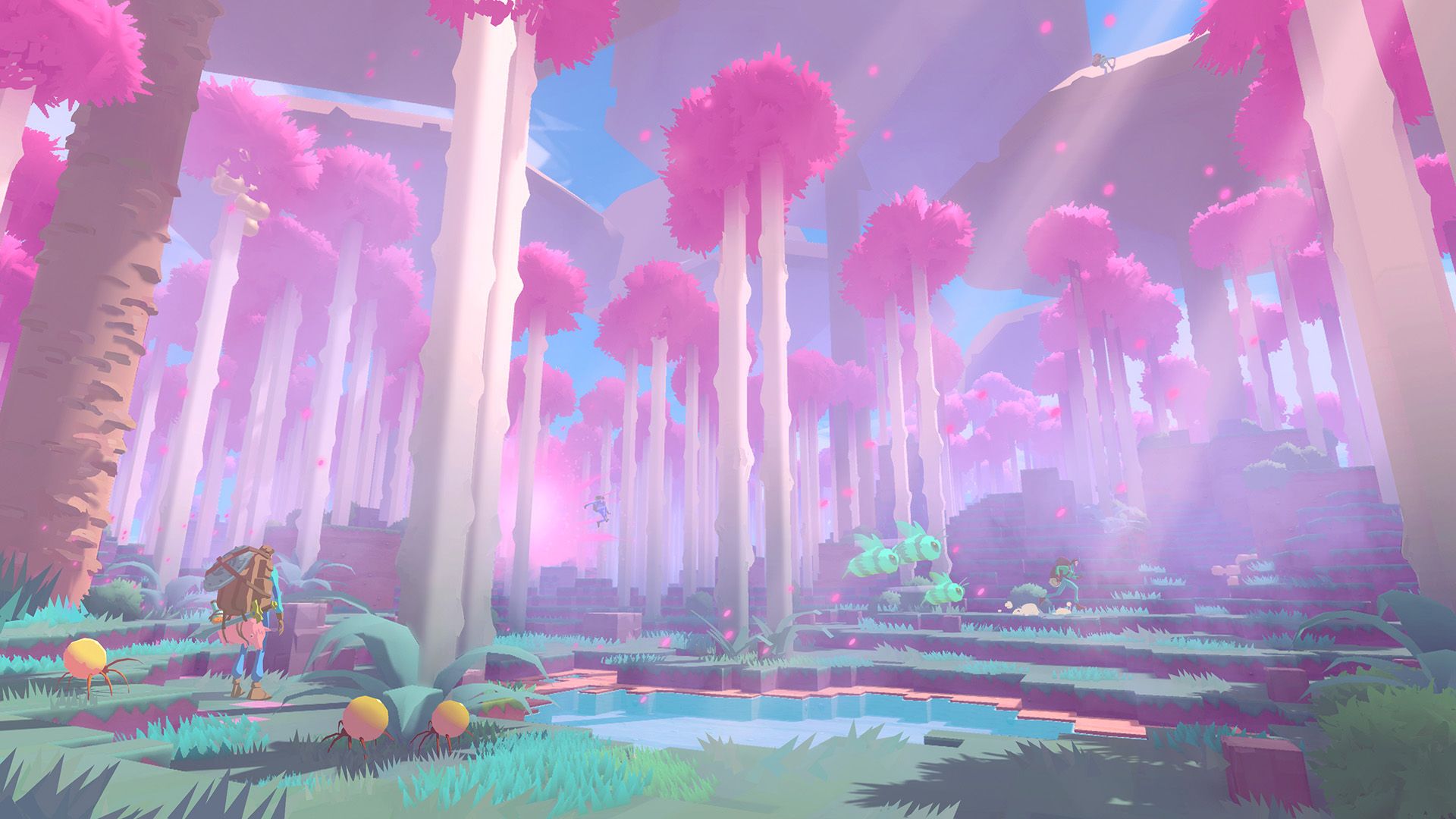 These vibrant plants are topped by a dandelion-like seed bulb that, if disturbed, spread clouds of poisonous spores that linger indefinitely. So players must be careful while moving through the forest that they, or their enemies, do not accidentally fell these deadly trees:

These mushrooms tower over the forest, offering shelter to its inhabitants. What’s more, the top surface of these organisms is covered in a unique substance that is incredibly springy and useful for numerous purposes. Reaching the top in order to harvest may prove difficult though.

Nestled away in secluded corners of the forest are clutches of pearlescent clambertick eggs. Anyone foolish enough to approach them without caution will be greeted by hordes of spider-like hatchlings who will leap onto their target, leeching their life away and causing other unwanted side effects. If careful, players can harvest these eggs and use them against enemies or as an ingredient in crafting recipes.

Giant flying insects that pollinate the Sporetrees. Generally placid, but will attack if provoked and they also explode into a cloud of smaller, angrier bees on death. The Queen Beeheemoth is improbably vast.

So, Sporetree Forest is the first biome that I’ve concentrated on developing, but I’ve ideas for several more that I’m excited to work on in future:

Rock stack island archipelagos being swiftly eroded by acid seas below. Many precious materials and treasure are revealed at low tide, but the harsh acidity of the water (and its dangerous inhabitants) mean that only the brave should attempt to explore at sea level.

Player Structures Another aspect of visual development that I’ve looked at this week is player-built structures. Shops, houses and other buildings play a pivotal role in the game design and so players must be able to create visually impressive structures in an intuitive way.

I’ve been thinking a lot about the level of visual fidelity/complexity that should be available to players. I think there’s room for a variety of building components besides cubes (wedges and other shapes) so long as the unit size remains consistent and the ‘socketing’ together of different elements makes sense.

With this in mind, I created what I imagine a player’s store - in this case a potion distillery - might look like. You can see that basic pieces like blocks and wedges have been supplemented with special elements like pipework and specialist props to really sell the vibe of this particular shop. I’m imagining that there would be numerous detail kits/pieces that would allow a great amount of customization possibilities. 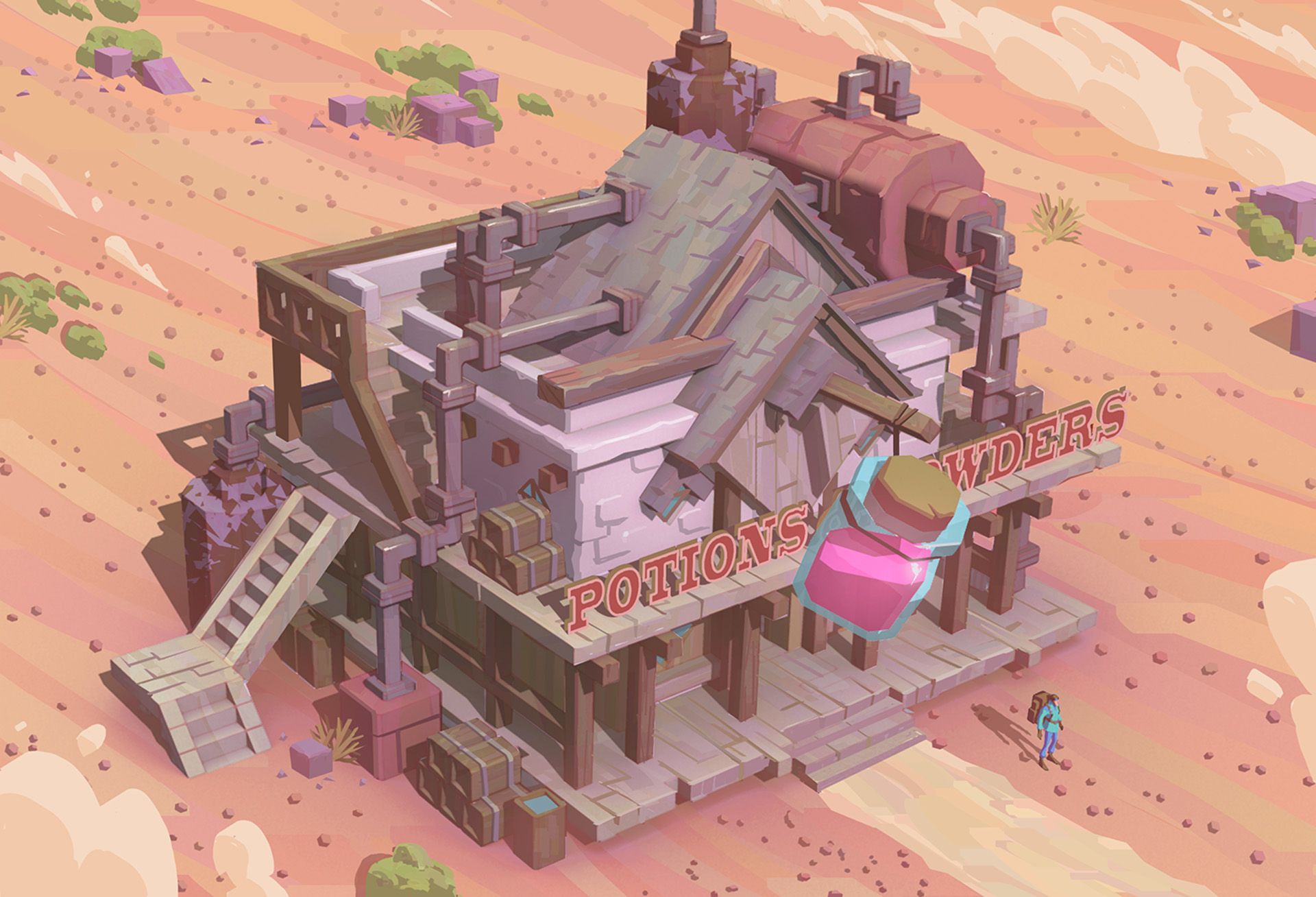 This was a long entry - many thanks if you made it this far! My plan is to continue to develop more biomes from a gameplay-first perspective. I’d also like to iterate on player characters - and characters in general tbh - based upon this updated IP direction.